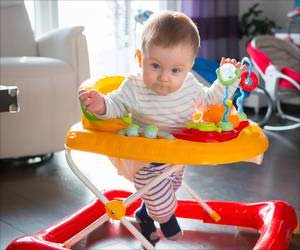 The American Academy of Pediatrics recently recommended that infant walkers be banned. A new study released by the organization supports a ban on the devices, called exersaucers. A pediatrician with the organization said they are inherently dangerous objects that offer no benefits at all to babies.

Makers of the devices say they can give babies between five and 15 months old more mobility before they learn how to walk. However, exersaucers have caused numerous deaths since the 1970s. Between 2004 and 2008, the walkers were associated with eight deaths. Between 1990 and 2014, over 230,000 babies visited emergency rooms for injuries caused by infant walkers.

The study found that the main types of injuries associated with these products are caused by falling down the stairs, or when a child gains access to a room that hasn’t been baby-proofed. About 90 percent of the injuries occurred because babies had hurt their heads or necks. Almost three-quarters fell down stairs. Only a small percentage of those babies were admitted to the hospital, but of those admitted, almost 40 percent had skull fractures.

If your child has suffered an injury because of an exersaucer, you should speak with an attorney. Your child may be entitled to compensation for his or her injuries. Call the Houston personal injury attorneys at Kennedy Hodges at 855-947-0707. We can help. Call us today to learn more, or visit our YouTube channel to learn more about your options.
Be the first to comment!