Truck drivers are often put under a microscope for their health and driving habits. Long-haul trucking is a demanding industry, and drivers are frequently required to work long hours, which contribute to a variety of different accidents. The U.S. Department of Transportation (DOT) estimates that approximately 4,000 lives are lost each year in large truck collisions, and fatigue is a primary cause in these accidents. The Federal Motor Carrier 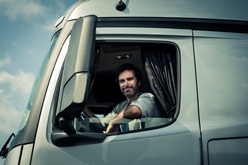 However, fatigue isn't the only health concern truck drivers deal with on the job. An investigation by CBS News revealed that drivers often conceal medical conditions to obtain or maintain employment. Commercial truck drivers are required to pass a DOT health screening, which is valid for two years, but may also carry a stipulation to regularly monitor a chronic condition. Regulators overhauled the screenings in 2014 and disqualified some 70,000 drivers as a result, out of about 8.5 million currently employed. However, the problem with the screenings is many of the health conditions that authorities are concerned with are only revealed through the driver’s honesty. If a driver conceals these issues, he can put other people on the road at risk.

Although many chronic conditions are easy to spot with medical tests, some are only revealed when a truck driver discloses that information. For instance, sleep apnea, a common condition that causes breathing to stop and start periodically during sleep, is a major cause of drowsiness and fatigue. It is also a condition that cannot be identified without the driver’s admission of symptoms. Truck drivers suffering from sleep apnea may be extremely drowsy, which impairs their judgment and reaction times. They may even fall asleep behind the wheel, putting everyone around them in significant danger.

In addition to sleep apnea, a variety of other medical conditions can adversely affect a trucker’s driving performance. For example, hepatitis, when left untreated, may result in symptoms such as confusion and drowsiness; both of which are serious matters for commercial vehicle drivers. And drivers with type 2 diabetes, those with vision issues, hearing difficulties, or a history of seizures can also be a danger to those who share the road. Drivers who intentionally hide these conditions can end up causing serious accidents.

A 2014 survey questioned approximately 1,700 truckers about their health. The participants revealed a variety of high risk factors for chronic disease, such as smoking, high blood pressure, high cholesterol, inadequate sleep, and insufficient physical inactivity. These conditions appeared in 88 percent of the respondents, compared to about half of the general population. Additionally, the study showed that truck drivers are twice as likely to become obese than the rest of the United States’ working population: 69 percent of the drivers surveyed were obese, and 17 were morbidly obese. All of these factors contribute to a multitude of chronic health issues, which can ultimately affect a trucker’s driving performance.

What to Do If You've Been in an Accident

If you were the victim of a commercial vehicle accident, the attorneys at Kennedy Hodges, LLP, may be able to help. Call us at 855-947-0707 to learn how you may be eligible to receive financial compensation that can help cover medical bills and vehicle repairs.