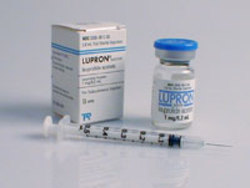 A lawsuit that was recently filed blames a controversial drug for health problems in thousands of women. The lawsuit claims that several pharmaceutical companies failed to warn about the crippling side effects of the drugs.

The drug in question is called Lupron. It was originally approved for prostate cancer, but for the last 20 years women have been taking it to relive pelvic pain caused by endometriosis. The woman who filed the lawsuit says her body feels as if it’s on fire and that she has arthritis in multiple areas of her body, which she blames on Lupron.

Lupron is an injection which stops the production of sex hormones. The plaintiff in the case only had two shots of Lupron to treat her endometriosis. Endometriosis involves painful lesions of tissue that is uterine-like, which feed on estrogen.

According to the FDA, Lupron users have filled out almost 24,000 reports of adverse reactions. More than half of them were deemed serious. Of the reactions, 60 percent were experienced by women. The company that manufactures Lupron, AbbVie, claims that it monitors and reports to regulatory agencies any new safety information it receives in order to ensure that the label has accurate warnings. The company refused to comment on the lawsuit or on studies related to the drug.

According to one expert witness in the case, even after a year off the drug, over 60 percent of women did not regain normal estrogen levels. Lupron sales totaled $829 million in 2017, and the company recently announced a new endometriosis pill which was approved by the FDA three months ago called Orilissa. The new drug’s label claims that it can lead to permanent bone loss and possible liver problems and suicidal thoughts. One individual who participated in a clinical trial of the drug took her own life.

Unfortunately, drug manufacturers often put profits ahead of customer safety. If you have been injured by a prescription drug such as Lupron or Orilissa, you should speak with an attorney. Call the Houston personal injury attorneys at Kennedy Hodges at 855-947-0707.