What are my chances of getting into an accident with a truck?

Driving next to a large truck isn’t something that many drivers of smaller vehicles look forward to doing. After all, truck drivers have difficulties 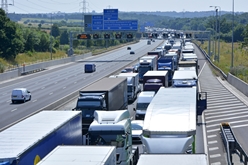 seeing cars around them because of their size, and driving next to a vehicle that has that much power and weight to it is quite intimidating.

Unfortunately, car vs. truck accidents are quite common, and often, the driver of the smaller vehicle typically gets the brunt of the injuries. But what may come as a surprise to you is that cars are usually the culprit of these accidents. According to a recent report that revealed the results of a study that evaluated over 8,000 vehicles involving car and truck accidents, car drivers caused the accidents 81 percent of the time. This is likely due to how many drivers cut trucks off and don’t give the trucker time to stop before a collision occurs, or runs into the truck while it is attempting to make a wide turn.

Why You’ll Likely Become Involved in a Truck Accident

The scary fact is, your chances of getting involved in a truck accident are quite high. According to the U.S. Department of Transportation (DOT), around 500,000 trucking accidents occur in the United States each year, and about 5,000 of those accidents are fatalities. Additionally, about one out of every eight traffic accidents that occur involve large trucks. What’s even more frightening is that when it comes to tractor-trailer accidents, 98 percent of fatalities involve those in the passenger vehicles.

Truck accidents occur for a variety of reasons, and many are unavoidable, which is why your chances of becoming involved and injured in an accident with a large truck is quite high. The following are some of the causes of truck accidents:

Truck accident victims are often plagued with life-changing injuries that can affect them for the rest of their lives. Not only can these injuries be devastating, but they can be costly, too. If you don’t think it’s fair to be held responsible for costs related to an accident that wasn’t your fault, you’re not alone—because we don’t either. The attorneys at Kennedy Hodges, LLP, work hard to help truck accident victims receive the compensation they deserve. Call us at 855-947-0707 to schedule your free appointment and speak with an attorney about your situation.