What You May Not Know About Drunk Driving Accidents

Drunk driving occurs when the person behind the wheel attempts to operate the vehicle while under the influence of alcohol. Although drivers can feel the effects of alcohol after drinking different amounts, the legal limit for driving in each state is a blood alcohol content (BAC) level of .08 percent. If a person attempts to operate a vehicle with a BAC higher than the legal limit, he could face time in jail. However, some drivers can become intoxicated with BACs less than .08 percent, and can still find themselves in trouble with the law, depending on the type of behavior they exude while driving.

The Scope of the Problem

Drunk driving is a major problem that ends the lives of thousands of Americans each year. In fact, according to a study conducted by the Centers for Disease Control and Prevention, 9,967 people died in 2014 due to drunk drivers. Additionally, each day about 28 people in the United States die in alcohol-related crashes. This averages to about one death every 53 minutes.

Young people and motorcyclists are typically most at risk for causing drunk driving accidents. Additionally, among drivers who have BAC levels of .08 percent or higher who were involved in fatal crashes in 2014, three out of every 10 were between the ages of 21 and 24. The next two largest 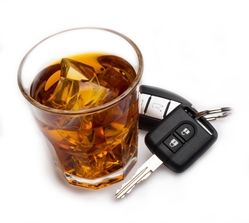 It also seems that history repeats itself, at least with drunk driving. According to research conducted by the Centers for Disease Control and Prevention, drivers who have BACs of .08 percent or higher who are involved in fatal crashes are seven times more likely to have prior convictions for DWIs than drivers who didn’t have alcohol-related infractions.

When Drunk Driving Crashes Are Most Likely to Occur

Generally speaking, drivers are more likely to become involved in crashes when large amounts of vehicles are on the road. For instance, rush hour is a popular time for accidents to occur. Weekends, summers, and holidays seem to be the time that the most alcohol-related crashes take place. Additionally, Christmas and New Year’s Eve are two of the most popular holidays for drunk driving accidents to occur.

The summer season, however, is extremely dangerous for drivers, particularly during summer vacation. In fact, teen drivers are most at risk during the time between Memorial Day and Labor Day, which is called the “100 Deadliest Days.” Nine of the 10 deadliest days for youth on US highways occurs during that period of time. One of the deadliest days for teen drivers is July 4th. In fact, a study showed that 144 driving-related fatalities occur on this holiday, and teens accounted for 10 percent of the accidents. Teens become involved in crashes for a variety of reasons.

Since younger drivers are the most at risk for causing alcohol-related crashes, it is important for parents to provide them with the information they need regarding how dangerous driving while intoxicated is. Additionally, those who are around people who are intoxicated should take the needed measures in order to prevent them from getting behind the wheel while under the influence, including taking away their vehicle keys and providing alternative methods for transportation, such as calling a cab.

If despite your best efforts, you still become the victim of a drunk driving accident, you may be entitled to receive compensation that can help pay for your medical bills, vehicle repairs, and time away from work. The attorneys at Kennedy Hodges, LLP want to help. Schedule an appointment by calling 855.947.0707 and speak with a legal professional about your situation and learn more about how we may be able to help you.