What Is a Complicated Road?

You may travel on a road that is considered complicated and not even know it. Roads that are deemed complicated usually are so because of their designs and unusual features. Some of the most common characteristics of complicated roads include:

Just one of these features on a road is enough to cause a dangerous accident, but when more than one of these features are present, the chances of getting into an accident are quite high. The risk becomes even greater when the driver is tired, distracted, operating the vehicle in an aggressive manner, is intoxicated, or is under the influence of drugs. Additionally, senior drivers have an increased risk of becoming involved in an accident on these dangerous roads, as well as inexperienced drivers.

Some roads are complicated simply because of their design. Particularly in the case of roads that are constructed around mountains and other surroundings that cause the road to curve—there’s not much anyone can do to make the road itself safer. Road signs and maintenance, however, are a 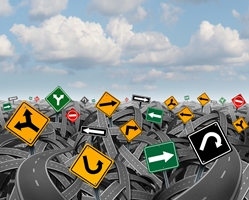 The managing agency in charge of taking care of the road has the duty to keep the road as safe as possible. This means ensuring that the road has smooth surfaces; that signs are visible, helpful, and present; and the road is kept in conditions that are safe for motorists.

If an accident was caused by the agency’s failure to maintain the road properly—such as repairing broken guardrails, replacing missing signs, and filling in potholes—the accident victims may be able to hold the agency liable for the problems it caused. However, the matter can become quite complicated if multiple agencies are responsible for caring for the road. For example, keeping the road free of ice and other inclement weather may be the state’s responsibility, but caring for the signs may be in the hands of another agency. And oftentimes, government agencies are immune from being sued, which means you can’t hold them responsible for accidents that occur because of their negligence.

Accident victims can benefit from the help of an experienced attorney in order to prove that their accidents were caused by negligence on the part of the agency that maintains the road. The attorney can talk to witnesses and collect other evidence—such as pictures of the crime scene and the police report—in order to attempt to prove that the accident was indeed caused by negligence that was of no fault of the driver. If they don’t have an experienced, hard-working attorney on their sides, they may not receive the compensation they deserve.

The attorneys at Kennedy Hodges, LLP, want accident victims to know that they have rights, and we want to help fight for them. Medical bills, vehicle repairs, and time lost from work can cause a great amount of debt, and unless you receive compensation from your accident, you may be held responsible for them. If you don’t think that’s fair, you’re not alone—because we don’t either.

Schedule an appointment to speak with a legal professional about your case by calling 855-947-0707 and find out what we can do for you. See what some of our former clients had to say about working with us by visiting our testimonials page!