Can You Develop Cancer From Errors That Occur During Your Hysterectomy?

The primary rule of medicine is “First, do no harm.” Unfortunately, even though doctors may try their best to uphold this practice, it doesn’t always happen. Such is the case for some women who undergo surgeries to improve their health, but in the end, come out worse for the wear.

Many believe that once they undergo hysterectomies, their chances of developing ovarian cancer are completely eliminated. Although the risk certainly decreases, it is not totally gone. To understand why this is, let’s take a look at the specifics of the surgery.

A hysterectomy is a surgical procedure in which the uterus is removed. A few different types of hysterectomies are performed:

In these surgeries, the ovaries are left in place. Even with the ovaries intact, it is believed that having a hysterectomy reduces the chance of developing ovarian cancer by one-third.

Why Ovarian Cancer Is Still Possible After the Ovaries Are Removed

It makes sense to believe that when a body part is removed, it can no longer develop cancer, and although that makes sense, it isn’t completely true, as is the case with ovarian cancer. Ovarian cells can migrate to the peritoneal area—the space between the vagina and anus—and if that occurs before the ovaries are removed, the cells can stay there and turn cancerous at any time. 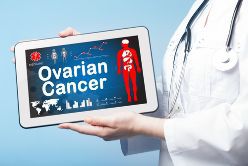 Because the cells are from the ovaries, it is considered ovarian cancer.

Recently, fear has struck the patient community regarding the link between hysterectomies and cancer. However, the relationship between the two has nothing to do with the actual surgery itself, but with a surgical tool that doctors once used when performing the operations.

The tool in question is called the power morcellator. This electric surgical device is used to cut up large chunks of tissue into smaller pieces, and was commonly used in hysterectomies. The device resembles a drill that has small blades at the end, which surgeons inserted into the body through small incisions. The benefits of using the tool were that they allowed surgeons to enter the body through small incisions, which meant doctors could avoid having to go through the core stomach muscles. The end result was typically less pain for patients and faster recovery times.

The major problem with using the tool, however, is that studies have shown that the removal of broken up tissue isn’t always completely effective. If tissue that contains cancerous cells are left in the body, they can continue to grow and spread to other areas of the body. Obviously, this creates a major cause for concern, and is one of the reasons why the Food and Drug Administration (FDA) banned doctors from using the device anymore.

The power morcellator is also used in the removal of fibroid tumors that are located inside of a woman’s uterus. Additionally, the tool was commonly used in laparoscopic renal or spleen surgery. In cases such as these, benign or cancerous tissue can spread to the abdomen, causing serious problems for patients.

Are You the Victim of Medical Malpractice?

If you believe that your cancer diagnosis is the result of a surgeon using a power morcellator during your operation, you may be entitled to receive financial compensation. The attorneys of Kennedy Hodges, LLP, want to talk to you about your situation. Schedule your appointment today by calling 855-947-0707.