Tired Truckers Present Unique Dangers to Everyone on the Road 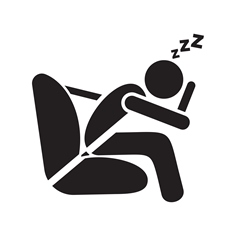 Every year in the United States, nearly three million truck drivers move over nine billion tons of freight across the country’s roadways. Today, both employers and consumers expect their products to arrive quickly, and commercial drivers feel the pressure to deliver. As a result, drivers often push their own physical limits and operate their vehicles even when tired. While it may not seem so, drowsy driving has been shown to have serious negative consequences for all those who share the road. A 2014 AAA Foundation study stated that drowsy drivers are involved in 21 percent of fatal crashes, and many researchers have compared the effects of fatigued driving to drunk driving. It is well known that commercial truck crashes can be especially devastating when they occur, and with fatigued truck drivers behind the wheel, those dangers can be heightened.

The Risks of Drowsy Driving are Real and Severe

While many people would never consider driving after drinking alcohol or taking drugs, many commercial vehicle operators don’t think twice about driving fatigued. This is especially dangerous, as the drivers may not even realize the risks to which they are exposing themselves and other drivers. The unsafe behaviors associated with drowsy driving include:

Additionally, when a driver is so tired he falls asleep behind the wheel, devastating accidents can occur. The loss of control of a truck can lead to all types of dangerous crashes, including rollovers, rear-end crashes, head-on collisions, and more. When these crashes occur, they nearly always have more serious consequences for the passengers of the smaller vehicles. In fatal two-vehicle crashes involving large trucks in 2015, the occupants in the passenger cars were killed 97 percent of the time.

In an effort to increase the safety of everyone, the Federal Motor Carrier Safety Administration (FMCSA) has set certain rules that drivers are to obey regarding how long they may drive. These rules include:

However, facing pressure from employers and consumers alike to deliver goods as quickly as possible, commercial drivers will often ignore these rules and continue to operate their vehicles well past the appropriate time. Hours of service violations were among the most common offenses reported in roadside inspections in 2015, with over 43,000 violations noted.

Identifying Fatigued Drivers Can Be Difficult

Many experts agree that the instances of drowsy driving are vastly underreported. These cases are often challenging for a few key reasons, including:

However, an experienced truck accident attorney can help you obtain the evidence you need to mount a successful personal injury case against the driver and trucking company. The state of Texas employs more truck drivers than any other state, and these accidents are all too common.

If you or someone you love has suffered injuries in a truck accident and you suspect a fatigued driver is to blame, you may be eligible to make a claim. The experienced accident attorneys at Kennedy Hodges, LLP, are here to help you protect your rights and obtain the compensation you deserve. Take a moment to fill out our online contact form, and you’ll receive a prompt response from a member of our legal team.