Commercial Drivers are Required to Follow Hours of Service Rules 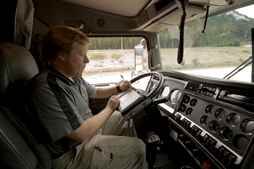 The national Centers for Disease Control and Prevention (CDC) calls drowsy driving a “major problem” for drivers in the United States. While many people may not feel that driving while tired is a problem, over 72,000 crashes were the result of drowsy driving in 2013. These accidents can occur at all times of day in all types of conditions, but there are certain risk factors that make a drowsy driving crash more likely to occur. There are some groups of drivers that are more likely to be involved in these crashes than others, including commercial drivers. This is especially dangerous because large commercial vehicles can cause severe damage when involved in road crashes, and it is often the occupants of smaller cars who are left to suffer the consequences. As a result, the government has developed rules that govern how much time a professional driver can spend behind the wheel. These mandates are known as hours of service rules.

What Are Hours of Service Rules for Commercial Drivers?

Research has shown that tired driving does inhibit the ability to safely operate a vehicle; many experts compare the effects of drowsy driving to drunk driving. A tired driver has difficulty concentrating, exhibits slower reaction times, and is not as aware of his surroundings as a rested driver. To minimize these risks, hours of service rules limit the amount of a driver can be on the road and require specific amounts of rest between periods of driving. These rules include:

Drivers are permitted to travel up to two extra hours if adverse weather conditions unexpectedly arise and slow travel down. This exception only allows for travel due to situations that the driver could not have known about or expected when he began his shift.

All commercial drivers are expected to adhere to the hours of service rules. They must keep track of their time in a logbook and be prepared to offer this logbook to authorities if they are asked.

Under pressure from employers and consumers to deliver their loads as quickly as possible, however, many drivers violate these operating rules and misrepresent their time in the logbooks. In roadside inspections, hours of service violations and logbook violations were among the top infractions. As a result, the Federal Motor Carrier Safety Administration (FMCSA) has recently adopted a rule requiring drivers to maintain electronic logbooks, which can be used to help verify hours of service by recording engine hours, vehicle movement, location, and miles driven.

Hours of Service Violations Can Result in Legal and Personal Consequences

When commercial drivers and their employers refuse to follow the hours of service rules, there can be severe consequences. The driver and company can face legal repercussions, in addition to the more serious risks associated with truck crashes. When tired truckers stay on the road in violation of the mandates, they run the risk of:

If You Suspect a Tired Trucker Caused Your Texas Crash

It can be difficult to prove that fatigue was the cause of your truck crash, but it is not impossible. If you take action quickly, you can protect your rights and obtain the compensation you need to move forward with your life. If you have been in a truck accident, if possible, a victim should:

The dedicated lawyers at Kennedy Hodges, L. L.P., have helped many truck accident victims just like you obtain the evidence they need to pursue a claim against a negligent driver or trucking company. If you or someone you love has suffered injuries, take a moment to fill out our online contact form. You’ll receive a prompt response from a member of our team who can answer your questions and address your concerns.