Aggressive Driving: What it Is and What You Can Do About it

Unfortunately, aggressive driving has become so commonplace that victims often don’t realize when it happens. Not only is aggressive driving illegal—it can turn fatal. In fact, according to a 2009 study conducted by the American Automobile Association, aggressive driving was found to be the culprit of 56 percent of fatal crashes that occurred between the years of 2003 to 2007. Despite the fact that most motorists agree that aggressive driving is, in fact, quite dangerous, many still engage in the potentially deadly behavior.

What Is Aggressive Driving?

Although all aggressive driving is potentially dangerous and can cause grave injuries, speeding seems to be the most hazardous. In all fatal crashes that occurred in 2014, speeding was the contributing factor in 18.8 percent of the accidents. Additionally, failure to stay in the proper lane, failure to yield to the right-of-way, operating the vehicle in an improper manner, and failure to obey traffic signs were also some of the more common aggressive driver contributors.

Aggressive driving is a matter that is not taken lightly in Washington, DC. In fact, the District has severe penalties for anyone who violates the law. According to DC Code 50-2201.04, a person can be charged with driving aggressively if he:

If a person is found guilty of aggressive driving, the penalties he could face include:

However, aggressive drivers can pay up to $250,000 in fines and serve 30 years or more in jail depending upon how many offenses have been committed and the severity of the injuries that were caused.

As the victim of an aggressive driving accident, you may be suffering from a variety of injuries, including lacerations, broken bones, spinal fractures, 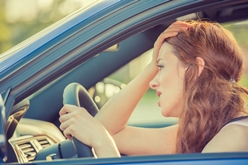 traumatic brain injuries, and emotional trauma. You may also be facing thousands of dollars in bills, stemming from your medical treatments, time lost from work, and vehicle repairs.

Relying on the insurance company to give you the compensation you deserve to cover all of these expenses will likely end in disappointment and money out of your pocket—which isn’t fair. The attorneys at Kennedy Hodges, LLP, believe that you should be able to hold those accountable for your injuries responsible for their negligence, and we want to help you do that. Schedule your appointment to speak with an attorney about your situation by calling 855-947-0707 and start learning more about your rights.