If you were hurt in a T-bone collision, you may be surprised to learn how common they are. According to the Insurance Institute for Highway Safety 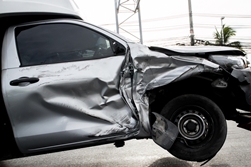 (IIHS), this type of crash was the second leading cause of traffic fatalities in 2014 at 33 percent, resulting in 3,484 people dying in these wrecks. These crashes—also known as side impact or sideswipe accidents—occur when one vehicle rams into the side of another vehicle. Victims can suffer surprisingly serious injuries because there is only a door and a window protecting them. If you were hurt in one of these accidents, you need to pursue your legal option of holding the negligent driver responsible for compensating you.

In this type of accident, either driver involved in a broadside crash could be the liable party. This may mean that you have to fight harder to prove that the other motorist is responsible for compensating you for your injuries. The major reasons these wrecks occur include:

With other types of crashes—such as head-on and rear-end collisions—there is usually additional car parts separating the victim from the other vehicle. While this does not mean a victim will not suffer serious injuries, the lack of protection in a T-bone collision explains why injuries can be so devastating. Some of the most common injuries victims suffer include:

Were you or a loved one hurt in a side impact collision? Start an online chat to learn how the experienced attorneys at Kennedy Hodges, LLP, can help you pursue your remedies to hold the negligent driver responsible.